One of the Royal Worcester specialities was the highly sought after painted fruit on porcelain.

The tradition originated with the painter Octar H. Copson, who in 1880 painted a plaque commissioned by a local farmer to commemorate the introduction of the Pershore plum. 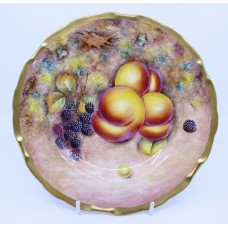